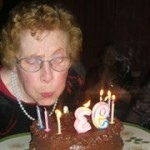 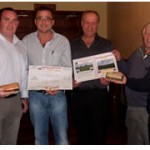 Annaduff GAA have officially launched their gold rush competition.
Squares are on sale at EUR5 each, the draw will take place in August 2009. 1st prize is a EUR3000 of gold bullion, 2nd, 3rd and fourth prizes are EUR1000 worth of silver each. Squares on sale at usual outlets. 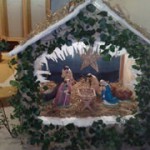 The Church of The Immaculate Conception in Drumsna has been decorated in preparation for our Christmas Celebrations, much credit to Margaret Maguire, Ella Gannon and Colleen Guckian. 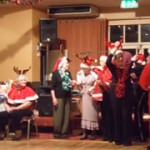 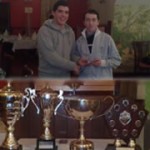 Annaduff Under 12, Under 14 and Under 16 Teams receive their medals from County Star Emlyn Mulligan. 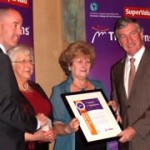 Drumsna awarded the Tidy Towns Endeavor Award to add to the numerous awards received by the village this year. 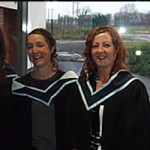 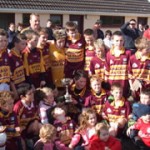 Well done to the Annaduff under 12 team who won the County Final, this title adds to the under 14 and under 16 championships already won by the club in 2008. 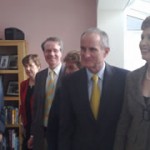 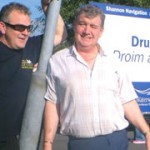 The Leitrim sub Aqua Club held a family fun day in the river and on the bank on Saturday September 20th 2008. 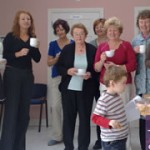 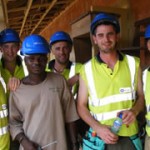 Good Progress was reported from the Teshie Schools Project in Ghana and in particular from Drumsna Volunteer, Derek Kellegher (Center of Photo). More Photos 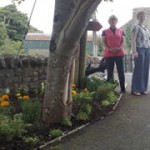 Geraldine Monaghan shows the Judges in the Floral Pride Competition one of the many wonderful floral displays in the village. 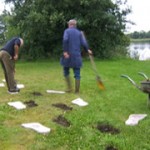 The “Footpath” to the Habitat
More Photos 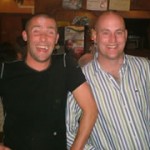 A very well supported race night was held in Taylor’s Bar, Drumsna on 12th July to raise funds for the construction of 4 schools in Ghana by a group including local electrician Derek Kellegher and his colleague Cathal Shivnan. 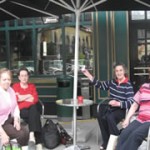 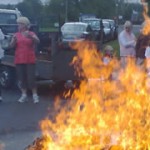 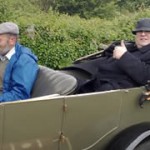 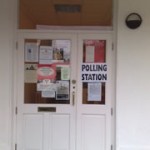 Just over 50% of the Drumsna electorate voted on the European Union’s Lisbon Treaty at the Community Resource Centre. This turnout was above the national average. 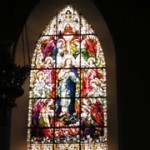 The beautiful stained glass window at the back of the Church of The Immaculate Conception, Drumsna has been removed for much needed repair and restoration. The project will cost 23,000 Euro. Parishioners may make contributions towards this cost through the Monthly collection envelopes. Contributions may also be sent to; the Restoration fund, c/o Father John Wall, Gortinty Lodge, Aughamore, Co. Leitrim. 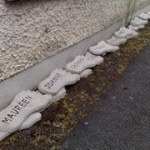 The “foot-path” has arrived in the village and will be stepping its way to the habitat by the Shannon, shortly. 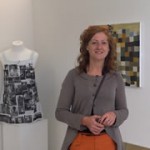 Drumsna Artist, Sinead Guckian had a very successful exhibition of some of her work at the 3rd year degree show – art and design in the Institute of Technology, Sligo. 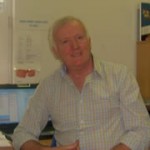 Mike Mallee has been appointed as the manager of the Drumsna Community Resource Centre. 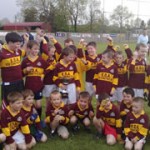 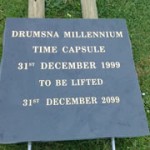 A plaque to mark the location of Drumsna’s millennium capsule has arrived in the village and has now been put in place. 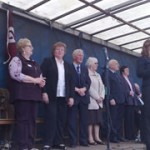 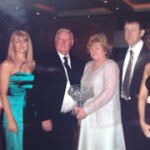 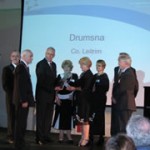 Pride of Place is an all-island competition which was first piloted in the summer of 2003. In 2007 The village of Drumsna won a National Award, which was presented at a Gala Ceremony in the Knockranny House Hotel, Westport, Co Mayo on 10 November 2007.